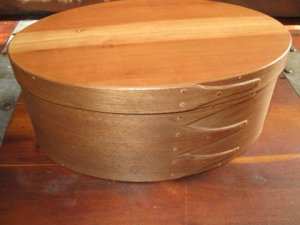 When I was a girl, my mother and brother and I used to drive through the old Shaker village at Pleasant Hill in the summer on the way to visit my grandparents’ lake cabin, before the road was re-routed around the historic village. Even then, in those simpler days of childhood, I was struck by the peace surrounding the village, the stately buildings, the gently rolling hills, the quiet air space overhead.

Years later, the state library where I worked used to hold retreats at Shakertown, thinking, I suppose, that the place was so isolated we would have to face head-on any problems with our co-workers, because there was no place to get away, just a common room stocked with board games and cards. The managers even went so far as to assign roommates who were known to have had conflicts in the past. When we arrived for one of these dreaded retreats, the librarian I was to bunk with immediately began opening the many doors and drawers in the floor-to-ceiling cabinetry and peering under the beds in our room, “looking for bodies,” she said. I never could tell if she was joking or not.

Another memory of Shakertown involves my in-laws, who complained bitterly the whole weekend that there was no television and therefore “nothing to do.” When my husband and I couldn’t stand it any more and decided to go out for a walk after dark, his parents worried out loud about tree limbs blowing down out of the ancient trees and knocking us in the head. Later, after we had returned to the room uninjured, they worried that our two-year-old would fall out of the high poster bed onto the hardwood floor and get a concussion and then how would we ever get him to the hospital, and where was the hospital, even. The pictures from that weekend show my son, wearing a spring green corduroy jacket with a hood, climbing the white rail fence against a painfully blue sky.

I don’t remember when I got my Shaker box, but I love the smooth oval shape, the fine-grained cedar, the tight-fitting lid. It is medium size, about 3¾” deep x 9½” long x 6½”  across. Although this is the only Shaker box I have, I picture it in the middle of a tower of other oval boxes, in descending sizes, one on top of the other . It is made of a thin piece of sweet-smelling wood that has been bent into shape and is held together by brass tacks where the tapered ends of the wood overlap. On the outside of the box, the end has been trimmed into three points, each point held down by four brass tacks. The lid is constructed like the box itself, an overlapping piece of thin wood, with four brass tacks holding it together; the top has a wide stripe in the grain that is lighter than the rest of the wood and runs the length of the box.

I always loved the simplicity of the Shaker design, the clean lines in their rooms, the lack of clutter, the wooden pegs along the wall for hanging ladder-back chairs. But I never thought about what they would have kept in their drawers and boxes. Something practical, I suspect—sewing goods, perhaps, or garden seeds. Not like the wild assortment of things I found when I opened this box for the first time in many years. The only thing of any real value is an 1890 Morgan silver dollar (which I earned in third grade for writing out the multiplication table faster than anyone else in my class). Most of the other objects have only sentimental value; some don’t even have that, since I can’t remember where they came from, what they were supposed to signify, why I put them in this box in the first place.

And now I don’t know what to do with them all: my baby shoes and a  hospital bracelet made of tiny pink beads and larger white beads strung on a cotton thread, spelling out my maiden name; a silver Tinkerbell charm that I got at Disneyland when I was seven; five tiny umbrellas made of balsa wood spokes covered with tissue paper; an address book with names of friends I had in high school; a miniature clip-on bow tie that my ex-husband might have worn as a child in the early 1950s; my older son’s plastic hospital bracelet from one of the times he broke his arm in preschool; necklaces my sons made for me out of tumbled stones; hand-painted combs and beaded barrettes I bought at art fairs when I wore my hair long and straight; bits of broken jewelry (a sweater clasp, a Wizard of Oz charm bracelet, a dove of peace with inlaid stones, a thin brass chain, a single earring with two interlocking red hearts); a set of “mom’s pins” my younger son earned in boy scouts, attached to a red ribbon; book marks; a miniature book about the seasons, printed in German; Army insignia from my older son’s time in the cavalry; sympathy cards for pets buried in my back yard; a hand-forged nail; a tiny whorled shell; a starfish; a smooth white stone; a buckeye; a blue irridescent “dragon’s tear.