This little project I have given myself—to look through all the compartments I have set up over the years (the shelves, the drawers, the boxes, the bags, the baskets) in an effort to figure out what I value, what I would try to save in a fire, what I want to destroy before I die, what I would grieve if it were forever lost to me, what I want to pass on to my descendants—has shown me how easily I allow myself to be distracted in my search for meaning and purpose. I have always admired those who single-mindedly follow their passion, those who believe without doubt in their calling, those who willingly sacrifice things of value for an ideal, a belief, or end.

I have never been like that; I  never wanted to choose a single path, nor did I feel that I was specially “called” for anything, although I do recognize that I have some gifts, and I have at times felt guilty during certain Sunday school lessons about “hiding one’s talents beneath a bushel.”  Even when I try to focus on what is before me, I am continually amazed at how quickly thoughts and insights and observations are gone before I can put them into words and how the act of trying to capture them changes the experience itself. I find myself continually noticing things that I want to explore “later, when I have more time,” but then later, something else has caught my attention or I have forgotten what it was I meant to think about. Occasionally, I may pick up a theme again as in a complicated fugue, but many things have been lost to memory over the years.

I think I know what I will find on my third shelf: books about spirituality and the unseen aspects of life, books that explore the mystery of why we are here, books about lucid dreaming and the dreams of women, about Earth religions and Celtic mythology, faery tales, books about mindfulness, books about the goddesses in every woman and the gods in every man, books about feng shui, books that could send me to prison in repressive governments. And I do find those books I was expecting, but in addition, I find a beautifully illustrated book I had forgotten I owned, given to me by my brother and his wife, written by their friend and former pastor, Jan Richardson, the woman who performed the ceremony at my niece’s wedding. 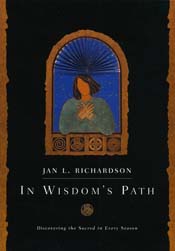 The book is called In Wisdom’s Path, and I have been reading it with great pleasure this past week, every morning as I drink my tea, before I get ready to face the day. The title refers to the Wisdom of God, portrayed in Proverbs and in apocryphal books as a woman who danced with God at creation and dwelled with God from the beginning of time. I like that. She is depicted as a woman “who had an active hand in history, who cries out for justice, who bids us to feast at her table, who calls out to us to follow her path.” I want to go with her. Jan’s book consists of strikingly beautiful paper collages, brief personal essays, scriptures, and poems depicting her ongoing search for god and the spiritual pilgrimage she made after leaving her position as associate pastor of a large Methodist congregation in Orlando.

The book follows the Christian liturgical year, beginning with “The Cave of the Heart” (Advent), continuing through “Showings and Encounters” (Epiphany), “Art from the Dark” (Lent), and  “Walking Out of the Wound” (Easter). The last section is on “Ordinary Time.” The author wrote this book while serving as artist-in-residence at San Pedro Center for Art and Contemplation, where she lived in a small cabin in the woods near a lake. In this beautiful book, she describes her spiritual pilgrimage and her encounters with God “in some of her forms and in some of his guises.” I feel blessed after having glimpsed a little of what she saw along the way.

1 thought on “Searching for Meaning”