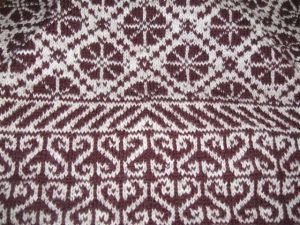 Unfortunately, I am now at the point where I must cut the steek or abandon the project. My friend Amber, who has already made a sweater by this same pattern, assures me I can do it, and several helpful articles online indicate that there is little risk of unraveling a sweater with a steek cut. But the idea of cutting through a tube of knitting that took so long to make is completely counterintuitive, and so far, I have resisted taking a pair of scissors to my work. The woman at the shop where I bought the yarn was no help, either. When I told her about this pattern, she said, “On, no! That’s too scary! I would never do that.” Not much of a sales pitch, I must say.

Nevertheless, I can see the advantages of steeking, especially for Fair Isle sweaters and other complicated patterns. With the steek, you knit the sweater in the round, with the right side facing, which allows you to follow the intricate pattern more easily. Having a steek means you don’t have to knit the sweater in sections (back, front, sleeves) and then sew them together, because you knit the entire sweater in one piece. Amber says that once I’ve mastered steeking, I will never again want to sew in sleeves. The steek itself is a kind of bridge of approximately six extra stitches knit in a tweed-like pattern to reduce the chance that it might ravel after being cut.

At this point, the sweater is a tube with a steek on each side where the sleeves will go. I have already basted down the center of each steek and run a machine stitch along both sides of the basting and across the bottom and top. The time has come to cut the steeks along the basting, so I can pick up the stitches around each opening and knit the sleeves into my sweater. There is another steek along the front neck, which I don’t completely understand, but I hope its purpose will become clear eventually.

Several people have been following the progress of my sweater since last December, including my aunt Juanita, my mother-in-law Ruth, and several women from the dance group in Lawrence, Kansas, who watched me struggle when I first started work on the sweater. I spent most of the first weekend casting on the 125 stitches, knitting a few rounds, discovering that I had twisted the stitches and was unknowingly knitting a Möbius sweater, and then taking the stitches back out. After I finally got the stitches cast on and then knit enough rounds to convince myself that the stitches were not twisted again, I went through several rounds of knitting and un-knitting the border pattern. Until I was able to see the pattern emerge, I kept losing track of where I was on the chart. But eventually, I got into the rhythm of the pattern. After that, each time I returned for a visit with my aunt or my mother-in-law or attended another dance in Lawrence, people would ask to see my sweater and comment on how much progress I had made.

The last time I worked on the sweater, however, was on a long drive to visit my mother over Memorial Day weekend. At that point, I had done all I could do until I got brave enough to take my scissors to the steeks. My excuse was that it was way too hot to sit with a pile of wool in my lap and knit in the summer. And I would almost have believed that excuse myself, except for the fact that I then proceeded to knit an alpaca wool scarf in the meantime.  But now that there is a slight chill in the air some evenings, I’m reminded how much I would love to be able to slip my arms into the sleeves of this beautiful sweater come winter time. So here goes. 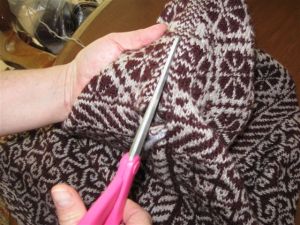 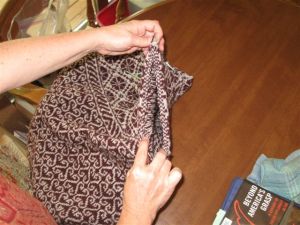 After the steek is cut, it's time to pick up stitches around the opening and begin knitting the sleeve.

3 thoughts on “Cutting the steek”