Or I should say, why is there still a dead parrot in my freezer? I originally put it there myself one winter day over a year ago (or maybe it’s been two years by now). Our furnace had gone off while we were at work and we came home to a shivering, sniffling little gray-cheeked parrot, with his feathers all puffed out and his eyes runny. He looked miserable, and I felt bad for him but didn’t know what to do for him besides turn up the heat. But it was already too late. Soon after, he stopped eating, and a few days later I found him dead on the bottom of the cage, where he had fallen from his perch. I intended to bury him in the spring when the ground thawed. In the meantime I wrapped him in newspaper and put him in the freezer. But to my chagrin, he’s still there, and I obviously can’t use the excuse that it’s been too cold or I haven’t had time to bury the poor little thing in all that time. 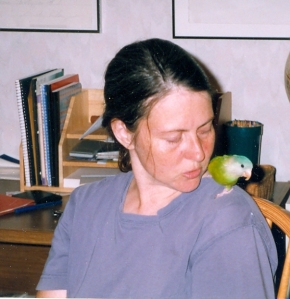 His name was Spike, and he belonged to my son Isaac, who had bought him with birthday money and allowance money when he was about eight years old. He was mostly green (a deep emerald green on his backs and wings, lime green on his belly), with gray cheeks, and a spot of orange under his wings. He was a small parrot, slightly bigger than a parakeet, and much louder. He was a sociable little bird but never quite learned to talk, although he often made little screechy sounds that mimicked our inflection, and he got very excited and much louder when people were trying to have a conversation. Whenever we played Latin music on the CD, he would bob his head and dance back and forth on his perch. Other music didn’t affect him the same way; we wondered if he were responding to some genetic memory. Occasionally, we let him out of his cage to fly around the house, but he mostly wanted to sit on our heads, which got annoying. He was about fifteen years old; if he hadn’t gotten sick, he might have lived another ten years. As it was, he had already outlived all Isaac’s other pets. At one point his room was so full of small pets (the parrot, two finches, two parakeets, two hamsters, a rat, an African frog of some sort, two snakes, a tortoise, a lizard, a box turtle, several goldfish, and a beta) that Isaac decided it was too noisy in there and moved to a different bedroom downstairs.

I have to admit this isn’t the first time I have had something strange in my freezer. My young sons routinely used the freezer in their pretend play. More than once, while rummaging around for fish sticks or frozen corn for dinner, I would come across miniature “freezing chambers,” with Hans Solo or Princess Leia encased in ice. One year Matt tried to save his snow balls for another day. Both he and his brother used the freezer and refrigerator to conduct numerous “scientific” experiments during elementary school. And for years, I could expect to find frozen mice in various stages of development (pinkies and fuzzies) as feed for Isaac’s snakes. And of course, the parrot wasn’t the only small pet to die during the winter. But this is the longest I have ever held such a thing in my freezer. It doesn’t take a genius, probably, to figure out that Spike’s death marked the end of an era that I was reluctant to let go.  Although at the time I complained incessantly about the noise and the mess and the many projects, I loved having my boys at home, and I miss them terribly.

1 thought on “Why is there a dead parrot in my freezer?”