This is the first year I have gotten any grapes on my vines, and although I don’t expect to actually get to eat any of them, between the Japanese beetles and the birds, not to mention the various diseases that grapes are prone to, I am still excited to see actual fruit forming on the vines that are growing over the arbor across my front walk.

My friend Frank Miranti, who was a gifted gardener and a generous person, gave me the cuttings early one spring after he had pruned his own well-established vines, and he wrote me a detailed email explaining how to care for them. He told me I should start by planting the whole bundle of cuttings together and let them send down their roots. He likely gave me a complicated formula of minerals and fertilizers to give them a good start. The next year I was to choose the 3-4 strongest and transplant them to where I wanted them to grow. That year he said  I should just let the vines grow straight up, tying them to a string or some sort of support as they grew higher. The third year I was to determine what training system I wanted to follow and begin pruning the grapes, but his email said at that point he would just come over to my house and show me what to do. Unfortunately, by the time the vines were ready to be trained to a trellis or a fence, my dear friend Frank had died unexpectedly in his sleep.

Since Frank was no longer here to give advice, last year I went to a workshop and tour at Les Bourgeois Winery and learned just enough about viticulture to be even more impressed with Frank’s ability to grow grapes without resorting to a bunch of chemical sprays and fertilizers. I still haven’t actually pruned my vines (maybe next year), and I am this week fighting off an infestation of Japanese beetles and fretting over what appears to be some kind of fungus, but I consider the small green fruits a form of success. I hope Frank would have agreed. 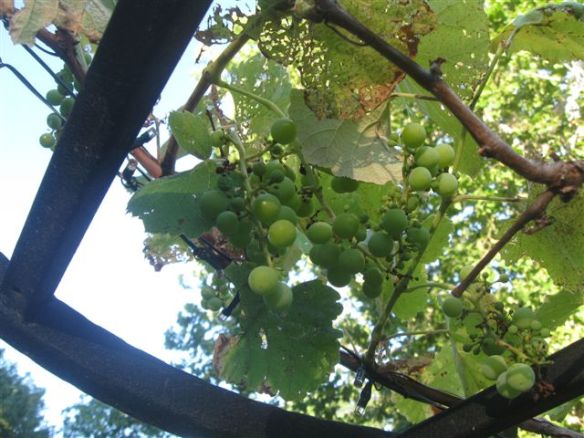