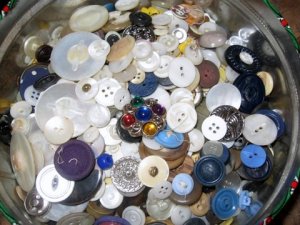 This week I have been digging through my button boxes, trying to find six matching buttons for a sweater vest I knit earlier this winter. What is it about buttons? These are not particularly fine buttons, but I find them interesting. I like the way they feel in my hands, the way the small ones slip through my fingers, the light sound they make when they tumble over each other into the metal box. I like to think of the people whose hands have touched these buttons over the years, as they sewed them onto a garment or pushed them through the button holes to fasten their shirts or jackets.

I don’t remember where I got this particular button box, but I have vague happy memories of playing with such a button box when I was a child. Do people even keep button boxes any more? Used to be women would snip the buttons off old clothes to re-use on another garment and would save any good pieces of fabric to make scrap quilts. At least that’s how I imagine it was, although my maternal grandmother didn’t sew at all and my paternal grandmother always bought new fabric for her quilts. So where did this particular button box come from? I only recognize a few of the buttons from my own sewing projects. Perhaps my mother-in-law, who sewed for other women and always had extra fabric and notions lying around, gave it to me the year I decided to make Christmas stockings for my children. Perhaps I bought some of the pearl buttons at the antique mall for that project. 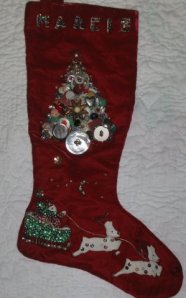 When I was eight, my aunt gave me and my brother beautiful red velvet Christmas stockings, lined with white satin. On the front of each was a large Christmas tree made entirely of antique buttons and sequins. When my brother and I posed in our pajamas with those stockings, holding them out for our parents to admire, beaming at the thought of all the wonderful gifts and candies that Santa would fill them with, they were so long they nearly reached the floor. We used to spend hours examining the buttons on our stockings, turning them this way and that in the colored lights from the Christmas tree, excited when we found we had buttons that matched, even more excited when we found buttons that the other didn’t have, each of us convinced that our stocking was the most beautiful, our buttons the most special.

The buttons in my button box are not nearly as fine. Mostly the box is filled with ordinary plastic buttons, the kind that would have been on dress shirts or wool coats or women’s jackets in the nineteen fifties. A few have embossed floral or geometric designs that I like. There are a couple metal buttons, one large button covered with blue and white polka-dot fabric, buttons shaped like leaves or bees or tiny handprints, many buttons made of pearl, a few buttons with rhinestones. There are no painted buttons or glass buttons. A quick web search tells me that I’m not the only one with a fascination for buttons and that button collecting gained popularity in the 1930s as a hobby that anyone could afford. The National Button Society was formed in 1938 and today has 3,000 members on four continents. There are button shows, including one this spring not too far from where I live. There are competitions and awards, magazines and newsletters. I discover that buttons are classified according to age, use, size, material, and design; and that age and use are specified by division. I learn that there is an online discussion group dedicated to button collecting.

I learn that I don’t know a thing about buttons, that the buttons that I cavalierly grouped together as all made of “plastic” could in fact be made of celluloid, cellulose acetate, casein, phenolic, amino, polyester, acrylic resins, polystyrene, nylon, polyclays, or ABS polymers (none of which mean anything to me). There are ways to test for these, of course, and if I cared enough, I could order a “Synthetic Polymers Handbook” that will give me “more information to aid in my identification efforts and general plastics education.” There are whole booklets filled with rules about how (or whether) to clean antique or vintage buttons, how to assemble a tray or mount your buttons, how to enter  button collections in competitions. Nearly 9,000 sellers are offering buttons for sale today on Ebay. Some buttons are listed individually; some by the pound. I am frankly overwhelmed. Now, instead of bringing me pleasure, my small box of buttons makes me anxious.