I’ve done it again–started a major project that will take me years to finish. This time I am knitting an afghan for my son and his wife. It was originally going to be a wedding present, but they have already been married for over a year now, and the afghan is only about 25% completed. Fortunately, they are very good natured and don’t seem to care how long it takes me. With luck, they will get it long before their tenth anniversary, at least.

I always like a challenge, and I don’t like doing the same thing over and over again, so I decided to make an Aran sampler afghan. The blocks I have made so far have been everything I hoped for–interesting and challenging, but not so difficult that I get frustrated and give up. The problem with samplers, though, is that by the time you figure out exactly how the pattern goes, it is time to move on to the next one. I am knitting with100% washable wool from Peru, in a brilliant blue yarn that I got at the Yarn Barn in Lawrence, Kansas, one weekend when we were in town for a dance.

There are several knitters who attend the dances in Kansas, and we like to compare projects when we see each other. One woman is making a gorgeous lace shawl. It’s a good way to keep motivated, knowing that people will expect to see progress the next time you show up at a dance. I used to knit while watching TV, but now that I no longer watch television, I mostly knit in the car while criss-crossing the state to various contra dances and square dances.

The pattern I am knitting is from a booklet called The Great American Aran Afghan, which consists of 24 original designs by 24 knitters (20 blocks for the afghan itself and 4 more to make a couple accent pillows). I am currently working on a block by a woman named Judy Sumner, whose square (which she calls kisses and hugs; spiders and bugs) was inspired by a birthday card from her twin grandaughters. I am having a great time knitting this square, making the bobbles that form the body of the spider, and watching the leafy vine emerge along the left-hand side of the square.

Here are the squares I have made so far.

This Aran square designed by Hanna Burns combines two DNA strand-like patterns with the Trinity Sticth to represent the Holy Trinity in Christianity.

Barbara Selesnick designed this square to remind her of the treasures people carry inside lockets and the stories they inspire. 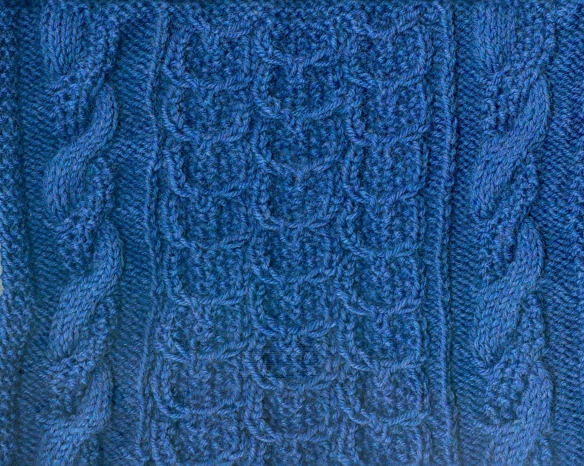 Ann Strong got her inspiration for this square from pomegranates. She used the Seed Wishbone pattern and the Double Texture Cable to illustrate the contrast between the smooth exteriors and the seedy, bumpy insides of the pomegranate.

This tree by Ada Fenick was incredibly fun to knit. It represents the Tree of Life shared by many cultures. The cables were taken from the wedding invitation of a good friend from college.