Lupus is a tiny river town located in Moniteau County, Missouri, with a population of 28 or so. The original riverside trading post was named Wolfe’s Point, but when the residents discovered that the name was already taken, they changed it to Lupus, which of course is Latin for wolf. A boomtown in the early 1900s when the railroad came through, with hotels and saw mills and banks and a city hall, the town is now a shadow of its former self. Yet there is a spirit in Lupus that defies reason, especially on a cool November night when the wind is high and the moon is full. Add in the dogs roaming freely down main street and the mighty Missouri River and trains moving past in the dark, and you have a song worth singing at the Lupus General Store. 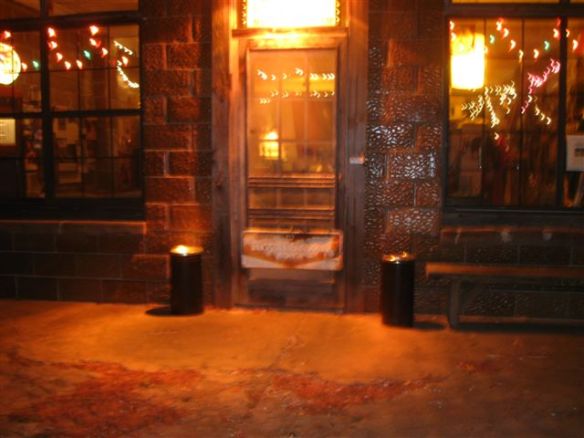 To get to Lupus from Columbia, Missouri, you head west on I-70, then take the Wooldrige Overton exit and follow state road 179 south for a ways, then take county road P for another 4 miles or so. Before you cross the railroad tracks and drive straight into the Missouri river, stop. You are in Lupus. The general store and the city hall building will be on your left.

Most of the houses in Lupus are elevated on stilts about 10 feet high to reduce damage from floodwaters. The story is that after the 1993 flood, FEMA offered residents money either to move out of the floodplain or raise their houses up on stilts. Most went with the stilts, which also had the advantage of providing additional storage space below the living areas.

The town is best known for its chili festival each October, which has been going on for thirty-some years. When I first moved to Missouri, I had never heard of the town of Lupus, so I mistakenly assumed that the chili fest was held to raise money to fight the disease. I have since learned that the festival started out as a fundraiser to help pay the electric bill for the city hall and the four street lights in town.

Doug Elly, mayor of Lupus for fifteen years, is credited with bringing musicians to the chili fest. He and Meredith Ludwig also sponsor the concert series in the Lupus General Store, which has brought in hundreds of folk musicians and bluegrass musicians to play for small but enthusiastic audiences over the years. The concert on November 11 by Bill Poss and the Useful Tools was reportedly the eighty-seventh of these concerts. Posters from previous concerts line line the walls and fill a flip book of plastic sleeves on the counter by the old cash register.

The musicians come from all over the world. Bill Poss (vocals and guitar) grew up in Detroit and now lives in Texas; the Useful Tools (Justine Fischer on bass, Kori Heppner on drums, and Matty Simpson on banjo) are from Canada. We once attended a screening at the General Store of a documentary on American roots music that was made by Dutch film makers. The joke among performers at the General Store is expressed in a bumper sticker displayed near the old cash register, “We’re Big in Lupus.”

The cinder-block building was built in 1926 to replace an earlier wooden building. The store is no longer a business, but the building is chock-full of merchandise that never sold and memorabilia from years of river life. 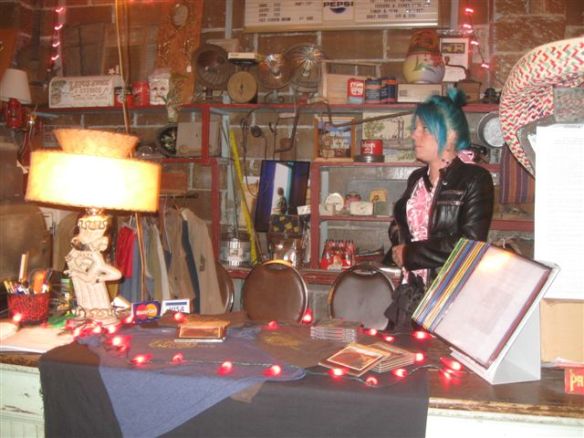 The old general store is filled with merchandise that never sold, many items still with their original price tags.

We were among the first to arrive, but everything was all set up for the concert, with several electric guitars, a banjo, a bass, and a drum set toward one end of the room next to the wood stove, and rows of couches and old chairs facing the stage. A large tapestry depicting a howling wolf hangs behind the stage. We let ourselves in and charged ourselves $7 for admission, then wandered around looking at the shelves and walls filled with old merchandise, while a small black cat ran under our feet and rubbed up against our legs. The room glowed warmly from the light of candles and lanterns; strings of twinkling white fairy lights and red hot peppers hung from the walls and ceiling. The coffee was percolating in the back room, and the hot water was ready for tea. Shortly before 7:00 Doug Elley showed up with the band members. Doug was carrying a big bowl of potato soup for the break. 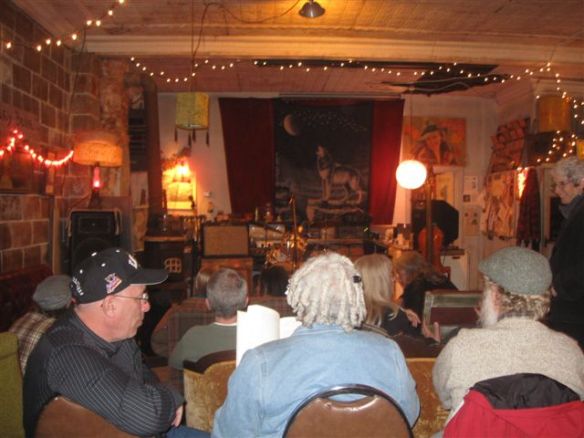 Waiting for the concert to start at the Lupus General Store.

By the time the concert started, most chairs were filled with all the usual suspects, including young children, as well as men and women in their eighties. Several local folk musicians were also in the audience, including the legendary Lee Ruth and his amazing beard.

The musicians would undoubtedly be staying long after the concert ended for a song swap and music jam. We weren’t sure what to expect when we saw the drum set on stage (a first for the General Store, as far as I know), but when the band stepped up and began singing, “Hay for Sale,” we knew we were in the right place.

More about the band and the town can be found here: